In New York young man who was paralyzed in an accident walked again. It happens thanking to a new machine called Indego 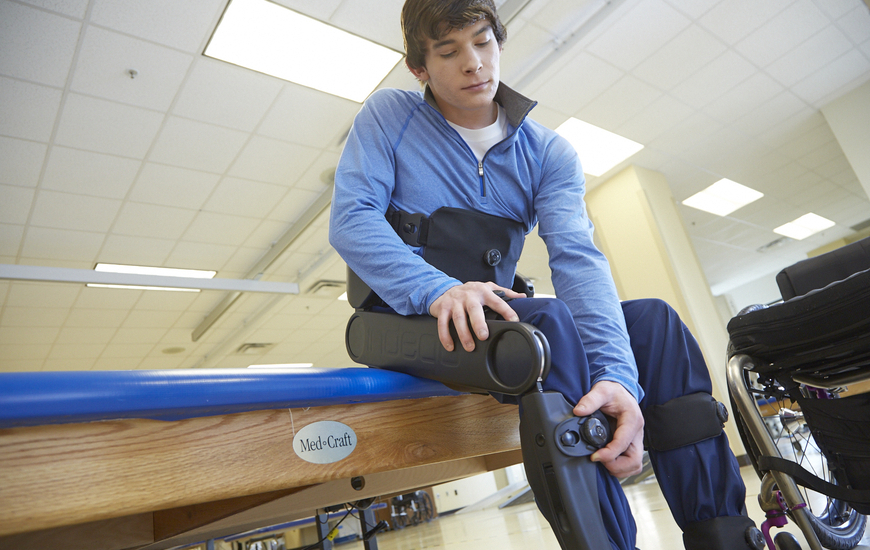 At St. Charles Hospital in Port Jefferson (New York) a young man who was paralyzed in an accident walked again. It happened a few day ago, as CBS2 reported exclusively. It is all thanks to cutting-edge robotic technology. Greg Durso arrived at the hospital in Port Jefferson in the wheelchair he has relied on since a an accident left him paralyzed from his chest down. But with the help of a carbon fiber robotic device fitted around his lower body and legs, Durso is now doing what he feared he’d never do again. “I think the funniest part was I actually felt tall again,” Durso said.

He is standing on his own two feet and walking for the first time in seven years. Durso is part of a clinical trial at St. Charles and hospitals nationwide testing the health benefits of a new exoskeleton called Indego. It is controlled with an app, and with Durso’s own breathing and upper body movement.

Robobtic exoskeletons have been around for several years weighing up to 100 pounds. But this one weighs just 26 pounds with no bulky back pack.

Carbon fiber composites were used early on by other exoskeleton pioneers like Ekso Bionics (Richmond, CA, US) and are also touted for lightweight in Hyundai’s HMEX and Cyberdyne’s HAL for Labor Support. However, most exoskeleton products use very little composites, if any, relying mainly on metals and plastics.

Ekso Bionics has also received FDA approval for its Ekso GT product to be used with stroke and spinal cord injury (SCI) patients, while the US Department of Veterans Affairs (VA) has issued a national coverage policy for the use and purchase of ReWalk Robotics Inc. (Marlborough, MA, US), robotic wearable exoskeletons for qualifying veterans with SCI.