The high-speed wing made of carbon fiber composites

Dassault Aviation announced an all-new Falcon jet whose top speed will be Mach 0.925 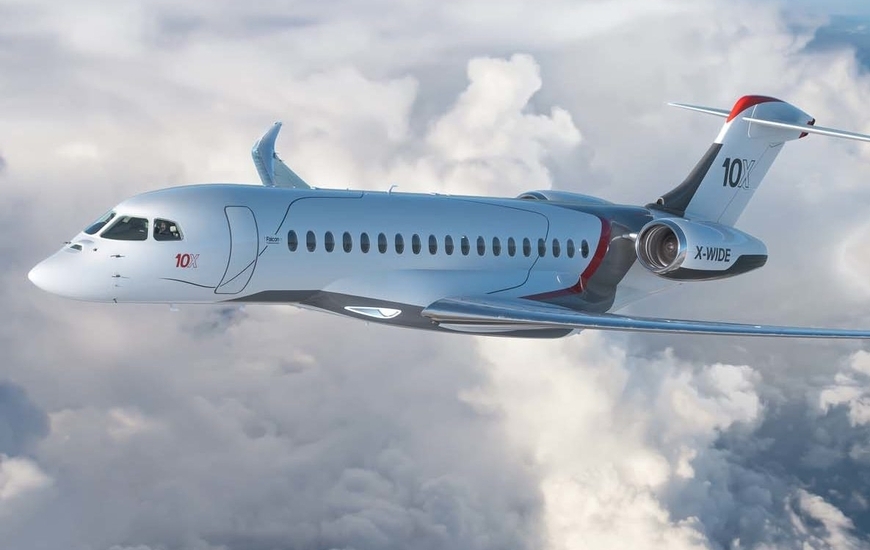 Dassault Aviation announced an all-new Falcon jet that will deliver a level of comfort, versatility and technology unmatched by any purpose-built business jet. Featuring a range of 7,500 nautical miles, the Falcon 10X will fly nonstop from New York to Shanghai, Los Angeles to Sydney, Hong Kong to New York or Paris to Santiago. Top speed will be Mach 0.925.

“Today we are introducing a new benchmark in business aviation,” said Dassault Chairman and CEO Eric Trappier. “The Falcon 10X will offer an unrivalled passenger experience over both short- and long-duration flights, along with breakthrough safety features from Dassault’s frontline fighter technology. We have optimized every aspect of the aircraft with the passenger in mind and established a new level of capability for ultra-long-range aircraft.”

The 10X will have the biggest and most comfortable cabin on the market and offer greater modularity than any other aircraft in its class, with a selection of multiple interior configurations. It will feature an entirely new fuselage with extra-large windows—nearly 50 percent larger than those on the Falcon 8X. Thirty-eight windows will line the fuselage making for the brightest cabin in business aviation.

The high-speed wing will be made of carbon fiber composites for maximum strength, reduced weight and minimum drag. Tailored for speed and efficiency, the very-high aspect ratio wing will be equipped with advanced, retractable high-lift devices offering superior maneuverability at low approach speeds.

The twin-engine aircraft will be powered by business aviation’s most advanced and efficient engine, the in-development Rolls Royce Pearl® 10X. The 10X is the latest, largest and most powerful version of the Pearl series, delivering more than 18,000 pounds of thrust.